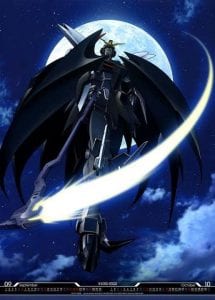 I’ll first talk about Gundam. There are many Mobile Suit Gundam shows but the best are Thunderbolt and Wing. Gundam Thunderbolt is probably the better show because of it’s darker themes and amazing story.  The characters are extremely interesting like Captain Io Fleming. The giant robot battles are a interesting. Although the huge robots are powerful. They still use new and pre-existing tactics unlike other shows where the better robots always win.The writers also show what life is like for the opponents side and how war hurts families ,people and friends from each side. Gundam Wing is not as philosophically deep like Thunderbolt but the fight scenes are a little bit better , the Gundams are cooler and they also use tactics. Most characters aren’t better than Thunderbolt’s but the main pilot for the Gundam Epyon is very different and everyone’s favorite

I haven’t watched Evangelion so I can’t say much but the Eva’s are weird but cool. I have also heard that the ending is messed up.

Transformers was a big part of my childhood. I had only seen the terrible Micheal Bay movies and the amazing Transformers Prime shows. I don’t like any of the other shows because they are only  a marketing tool to sell more toys but Prime cared about animation unlike Energon and other installments, characters and story unlike every other Transformers show ever.

I SHALL NOT talk about my thoughts on the latest Pacific Rim movie but the original was amazing. They really cared about detail, like how the rain on the robot looked super realistic. Their slow movements ephasised their punches and made them look more powerful. I also like the concept of giant robots fighting giant monsters.

There you wasted two minutes of your life reading this. I hope you enjoyed spending precious time of your short life on this. Now go play football.

Welcome to your brand new blog at Edublogs!

To get started, simply visit your blog’s dashboard, edit or delete this post and check out all the other options available to you.

We can walk you through step-by-step in our guide to getting started with your blog.